Nisenfeld will work, watch at Olympics 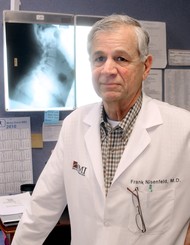 Frank Nisenfeld loves winter sports and could go to the Winter Olympics in Vancouver in February as a spectator, but that's not enough for him.

The 65-year-old Frederick orthopedic surgeon wants to be part of the Winter Games.

So this year he will be working as an orthopedic volunteer at a clinic in the Olympic Village at the Winter Games in Vancouver. He did the same thing at the Winter Olympics in Torino, Italy, four years ago.

He won't get paid and must pay for his own travel and lodging. He doesn't even get discounts on Olympics tickets. He does get lunch, which he said is very good.

"I guess I'm an Olympic groupie," he said as he sat in his office in Frederick last week and talked about his upcoming trip. "I could have gone as a spectator, but I think this is just doing my thing as a physician and being more a part of it."

He would only do it for the Winter Games.

"I really love the winter and I love the Winter Olympics," he said. "I love the snow, I love ice skating, skiing. You get to see the world-class athletes doing their things and being part of it, helping out. It's really cool and not just temperature-wise."

Nisenfeld will arrive in Vancouver on Feb. 10, two days before the opening ceremonies, and stay until Feb. 27, a day before the Games end.

This year, Nisenfeld's wife, Sue, will be with him for the entire trip. She was at the Torino Olympics for about a week.

Nisenfeld decided while working at the 2006 Games that he wanted to return this year. So did most of his colleagues. Of the three doctors that worked with him in Torino, two will be back this year.

Vancouver officials had built a log cabin at the last Olympics to promote their Games. Nisenfeld went there and talked with them about 2010, and they told him what how he could make it happen.

Then, in late 2008, he learned from the Vancouver website that they were looking for volunteers. He immediately sent in his application.

He was officially offered a position on Aug. 4, but he was told beforehand that he would get it.

Although he knew six months in advance that he would work at the Torino clinic, he ran into one big problem -- lodging.

He couldn't find a place to stay and didn't know if he would be able to go. He didn't get lodging until a week before the Games.

It will also be easier in Vancouver because it's an English-speaking country. Nisenfeld speaks Italian and helped out as a translator in Torino.

"But I don't speak Italian as well as I speak English," he said.

He isn't sure of his hours, but figures he will work from 8 a.m. to 4 p.m. like he did four years ago. One difference is that this time around he will be on call at night if there are any orthopedic questions.

He will stay near the Olympic village. He expects security to be about the same as it was four years ago.

"I can't imagine it being any tighter than Torino," he said. "It was almost too much. There was a big presence of police and military. They weren't taking any chances."

Nisenfeld hopes to see more events than he did four years ago, when he mainly attended women's figure skating, ice hockey and short track speed skating.

This year, he also wants to attend skiing events in Whistler, about two hours from Vancouver. Nisenfeld and his family are avid skiers.

And then there is the idea of just being around the Olympics and taking it all in.

Nisenfeld also hopes this won't be his last Winter Olympics. He's already making plans to volunteer for the 2014 Games in Sochi, Russia.

"It's located on the Black Sea and I'm really looking forward to that, God willing," Nisenfeld said.