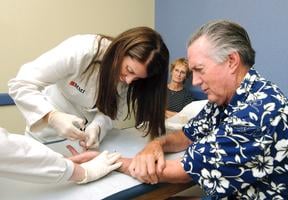 With his pinkie finger stuck in a downward position, Tim Hickey had a few complaints.

He couldn't lift barbells anymore. He had trouble operating a chain saw. But worst of all, he said his contracted finger made it hard to pick up a beer.

Hickey, a retired family doctor from Frederick, suffers from Dupuytren's contracture, a condition that causes tissue in the hands to thicken and contract, pulling the fingers toward the palm. Although Dupuytren's is painless, Hickey said it's annoying.

Dupuytren's is hereditary, affecting mostly men between the ages of 40 to 60 of Northern European descent. It's sometimes called Viking disease.

"I thought I was all Irish," Hickey joked, saying his ancestors must have had a run-in with a Viking somewhere along the way.

Last month, Hickey underwent a new, nonsurgical treatment for Dupuytren's. The procedure is being performed in Frederick County by Dr. Kristin Nesbitt of the Mid-Maryland Musculoskeletal Institute in Frederick.

The new procedure involves injecting the patient's hand with the drug Xiaflex, a Food and Drug Administration approved enzyme that breaks down the thickened tissue. A patient gets an injection of Xiaflex and the next day the doctor manipulates the finger to break up the thickened tissue.

Nesbitt received training on the procedure in Baltimore and said the drug has been available for about a year.

Before Xiaflex, Dupuytren's was treated with an invasive surgical procedure. A doctor would make an incision down the length of the patient's hand and scrape out the hardened tissue manually.

Nesbitt said she is now doing more Xiaflex injections than surgeries to treat the condition.

"So far, the results my patients have experienced with the injections are equal to those who had surgery, without the potential risks associated with a surgical procedure," Nesbitt said. 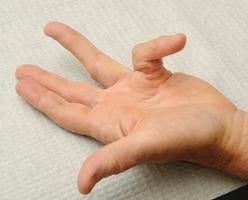 Hickey felt his pinkie finger begin to contract about five years ago. The movement was slow for years, but the contracture recently became more severe and his finger was nearly touching his palm in the months before the procedure.

Both he and his wife, Sally, were excited for him to receive the injection, which took Nesbitt about 60 seconds to do. Hickey said it hurt a bit, but it was more than worth it.

The next day, Hickey returned to Nesbitt's office to have her manipulate his finger and break up the hardened tissue.

The second day is more painful than the first, and patients can opt to have their fingers numbed. Hickey told Nesbitt he has a high pain tolerance and probably wouldn't need the numbing. But the morning of the second day, he caught his finger on something and quickly changed his mind.

"Get it numbed," he said as, a stern suggestion to others.

Because Hickey had two different cords on his finger contract, his finger wasn't completely straight. But in 30 days, he could return for another treatment.

If he had opted for surgery, Hickey would have had to complete several weeks of physical therapy for his hand. After the injection, he does not need physical therapy but will have to wear a splint on his finger for four weeks to ensure there is no immediate contraction.

"I think this will definitely become the treatment of choice," Nesbitt said.

Before leaving, Hickey jokingly asked Nesbitt about holding a chain saw. She said he should probably take it easy for a while and reminded him to wear his splint.

He said he was excited to pick up a beer using all his fingers again.