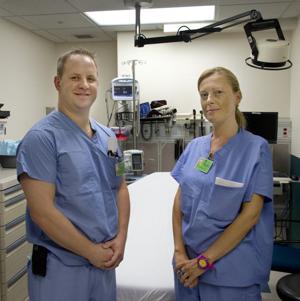 Two doctors on opposite sides of the Atlantic Ocean have set up their own international exchange program.

Dr. Frank Nisenfeld and his wife, Sue, have hosted Dr. Anna Rebesco, of Asti, Italy, for a month, so she could see how medicine is practiced in the states. Nisenfeld, an orthopedic surgeon with the Mid-Maryland Musculoskeletal Institute in Frederick, met Rebesco when he went to Turin, Italy, as a volunteer doctor during the 2006 Winter Olympics.

An idea came to him as he watched the 2002 Winter Olympics on TV: If Italy were selected for the games, he would try to go, since he and his wife have enjoyed several visits to Italy.

He found out how to volunteer to be one of the doctors at the Olympic village clinic, which takes care of anyone as needed.

"I was there to help," Nisenfeld said. "I was not there on a learning experience."

Rebesco practices emergency internal medicine and also volunteered to be at the village clinic.

Athletes at the games have their own doctors, but spectators and the entourage that come with the stars might need medical attention. Among Nisenfeld's patients were an Olympic official who slipped, and a team driver who slammed a finger in the door.

"I found that I was most useful as a translator," said Nisenfeld, who speaks Italian fluently.

His favorite moment was meeting Eric Heiden, the speedskater who won five gold medals in 1980 and is now an orthopedic surgeon. Nisenfeld laughed and said now Heiden has a valuable photo with Nisenfeld in it.

"Torino during (the) Olympic Games was magic," Rebesco said.

Nisenfeld and Rebesco kept in touch, and her boss in Italy encouraged her to see how medicine is practiced in the U.S. Her boss recommended the experience because he had observed at Massachusetts General Hospital and was a fellow in trauma and emergency medicine at the University of Alabama, Nisenfeld said.

Frederick Memorial Hospital extended an invitation for Rebesco to observe the emergency room in the mornings.

FMH gave Rebesco a glimpse into much more than she hoped, she said, and Dr. John Vitarello, cardiologist, allowed her to observe heart surgery. She would not have that opportunity in Italy, she said.

At FMH, she worked side by side with Tom Monko, a Mid-Maryland Musculoskeletal Institute physician assistant who works at FMH's emergency room. In the afternoons she worked at the institute.

ER and medical practice management impressed her, and she observed more cooperation among departments than in Italy.

She said Maryland is renowned abroad for its leading edge in emergency care, and Nisenfeld took her to visit R Adams Cowley Shock Trauma Center in Baltimore.

"I think this month has been one of the most important professional months of my life," she said.

The Nisenfelds made sure to give Rebesco more than medical things to do, since she had visited the United States before, but not Maryland. They went to Annapolis, Philadelphia and Atlantic City, N.J.

She enjoyed seeing Colonial architecture, and Nisenfeld added humbly that what seems old here is about 2,000 years newer than Italy's oldest architecture. Atlantic City excited her love of nature, to the point of amusing him.

"She, like, freaks out chasing sea gulls," he said. "We've had a great time."

Monko said the experience awakened his appreciation for Old World languages, beyond the Asian and Spanish languages that are promoted these days for practical reasons. It seems one-dimensional now not to know more than one language, he said, and he hopes to learn Italian.

Rebesco summed up the month as "fantastic," and said she wanted to thank all of the hospital and institute staff.

"They are all in my heart forever."

Know of a person who would make a good Slice? If so, please send your suggestions to citydesk@newspost.comor call us at 301-662-1178 and ask for a city editor.