Get Moving - Get Healthy 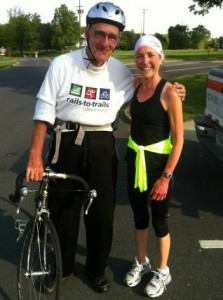 Regular exercise won't prevent all diseases or injuries but the simple act of moving your body can work wonders. Great things can happen to your body when you get off the couch and start moving. Let’s look at a few points that can help you start living a healthier life in 2013.

1. There are more than 200 studies to prove that regular exercise makes you less tense and better able to cope with events that add to stress. Aerobic activity can often lessen the need to take anti-anxiety or depression medications.

2. Moderate daily exercises such as an hour long walk or 30 minute jog may reduce your risk of colon cancer by 46%.

3. Both men and women start losing bone mass between the ages of 30 to 40. Lifting weights can not only halt the decline but in some cases reverse it, drastically reducing your risk for osteoporosis.. Weight bearing activities like walking and running also keep your bones strong.

4. In an 8 year study of more than 20,000 men, those who were lean but unfit had twice the risk of death as lean, fit men. Even overweight men who were fit had a lower death rate than those who were lean but unfit. Maintaining aerobic fitness through your middle age and beyond can delay biological aging up to 12 years and prolong independence during old age. This was concluded in an analysis published in the British Journal of Sports Medicine (2008, April)

As an exercise enthusiast myself, I had the honor of meeting a gentleman, who at the age of 83 was training for a 100 mile bike ride. He had just completed a 25 mile bike ride when I was finishing my morning run at Antietam Battlefield. The gentleman was a great example of how a senior benefited with regular aerobic exercise. In scientific terms, maximal aerobic power (our stamina and endurance) starts to decline from middle age, decreasing about 5 ml (kg.min) every decade. When it falls below around 18 ml in men and 15 ml in women it becomes difficult to do much activity at all without severe fatigue. In a typical sedentary man, the maximal aerobic power will have fallen to 25 kg.min by the age of 60, almost half of what it was at the age of 20. But the evidence shows that regular aerobic exercise can slow or reverse the drastic decline even in later life. Research shows that relatively high intense aerobic exercises over a relatively long period boosted maximal aerobic power by 25% equivalent to a gain of 6ml (kg.min) or 10-12 biological years. This conservation of maximal oxygen intake increases the likelihood that the healthy elderly person will retain functional independence.

We may not all be able to compete in long distance cycling or running, however, working on small goals such as 30 minute walks 2-3 times a week is a great start. To preserve muscle power, balance, and mental sharpness, aerobic fitness should be the prescriptiont we all take.

Lessen the effects of cognitive and physical decline, get off the couch, get out of the house, and get moving. It’s easy to do, and everyone can do it.