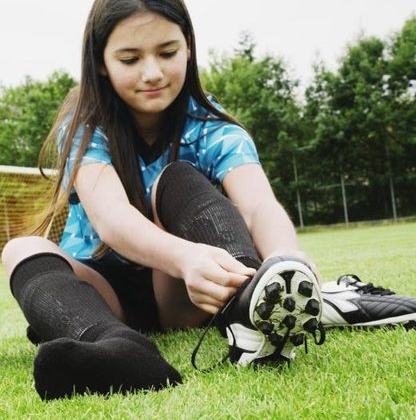 Every spring, along with the increase in monkey bar, trampoline, and scooter injuries, I see a spike in the number of children presenting to my clinic with heel pain. As soccer season swings into full gear along with other cleat-wearing and barefoot sports, and the physical education teachers begin the cycle of outdoor running, heel pain becomes more prevalent. This heel pain varies in intensity from a dull ache at the end of practice or a game to a child who will toe walk and not put his or her heel down on the ground. Most often this is diagnosed as Sever’s Disease or, more technically, calcaneal apopyhisitis.

The calcaneus is the heel bone and the apophysis is the growth center on the back of that heel bone. So, calcaneal apophysitis translates to inflammation of the growth center of the heel bone. This most commonly affects boys from ages 10-15 and girls from ages 8-13. Prior to this age group, the calcaneus has a large cartilage cap through which the strong Achilles tendon of the calf muscles attaches. During this age range that cartilage cap starts to ossify or turn to bone. By age 15, the two portions of bone have fused to form one solid bone.

During the time after the initiation of ossification and before fusion, there are two portions of bone separated by a relatively weaker cartilage layer. I like to describe it as the cream filling between the two Oreo cookies. This layer is subjected to a variety of forces which can create micromotion and inflammation in it.

The first force is that of the Achilles tendon pulling on the bony cap. Bones tend to grow first and muscles and tendons, in general, have to stretch to catch up. During a growth spurt, the Achilles tendon becomes relatively tight creating increased forces on its connection to the bone through the calcaneal apophysis or growth center. Additionally, this relatively weak region absorbs the majority of force with each heel strike as a child runs or jumps, particularly in a poorly cushioned shoe like a cleat.

The pain is thought to be brought about by overuse, or repetitive microtrauma, in a child with susceptible anatomy—ossification of the growth center with relatively tight muscles. On exam, it is most commonly elicited by medial to lateral squeezing of the heel.

The treatment of calcaneal apophysitis includes stretching, ice, anti-inflammatories, activity modification and shoe wear modification. For all patients with heel pain, I recommend the use of heel cups. These are silicone cushions which buffer heel strike forces and also elevate the heel which lessons the pull of the Achilles tendon. Occasionally I will recommend a night brace to hold the foot in a stretched position to add several hours of passive stretching. Additionally, if the pain is severe or the child requires a gentle reminder not to run or jump, I will recommend a walking boot or cast. Finally, if experiencing heel pain, shoe wear should be limited to supportive athletic shoes; flip flops, Uggs, Chucks, skater shoes, and flats should be avoided.

The time to return to sports is variable. If the case is mild, often just adding the stretching, ice, anti-inflammatories and heel cups is enough. Sometimes a 4-6 week break from activities is required. This pain is a self-limited process rarely leading to any long term disablities or problems. Children can “play through the pain” without doing irreversible damage. But, the pain will not go away until given the time to do so which is different for each individual. Stretching should be an ongoing and encouraged activity for all sports participation.

Sever’s disease is primarily a clinical diagnosis. If pain persists or is severe, I do recommend x-ray evaluation to rule out other sources of heel pain such as a stress fracture or bone cyst.

This same phenomenon can occur in other areas of the body where tendons attach to bone through growth centers. One better know example is Osgood-Schlatter’s disease which is tibial tubercle apophysitis. This occurs just below the knee cap where the tendons from the quadriceps muscle attach to the shin bone. Another example is iliac apophysitis along the top of the pelvis where the abdominal oblique muscles attach often seen in young runners. In all these conditions, the same basic treatment protocol is followed—stretching, ice, anti-inflammatories, activity modification and time.